After the end of the Cold War, most Western countries cut their defense budgets significantly. As a result, they now have equipment that is often 50 years old or even older. Obsolete is therefore the buzzword: replacement parts are no longer available. Additive manufacturing is the solution to this problem, says the Australian SPEE3D. 3D metalprinting is going to change logistics fundamentally.

Together with the Australian Army, the manufacturer of 3D metal printers is testing the use of SPEE3D’s 3D metalprinting technology in real life defense conditions (temperatures up to 37C and humidity around 80%) in both the Army and the Navy. “We entered this market because we see that all armies in the world have the same problem,” says Stefan Ritt, Vice President/MD EMEA operations SPEE3D. Armored vehicles are at a standstill, naval ships cannot sail because replacement parts are no longer available – or only with long delivery times.

According to Stefan Ritt, the problems in the army are also found in, for example, the oil and gas industry, offshore wind farms and the shipping industry. The expensive equipment in these industries has a long lifespan. If parts break down, there are often long delivery times or the original suppliers no longer exist. Some industries therefore keep expensive stocks in the supply chain. “With our cold spray technology, we have a solution to produce these metal parts on demand.”

Why cold spray is suitable

SPEE3D’s cold spray process uses the kinetic energy of the metal powders, which are sprayed at a rate of three times the speed of sound, to solidify them and thus building up the metal part layer by layer. Electrically, the powder is preheated to 300 degrees; no other energy source is needed for the rest. With this technology the SPEE3D machines builds up 100 grams of metal per minute, up to 100 times faster than the laser powder bed metal printers. With this speed the AM-equipment can 3D print parts up to 40 kilograms. Because no laser is needed, the technology can be integrated in a mobile unit like the WARSPEE3D with which the Australian army has done tests in the Australian bush. Stefan Ritt: “A laser with all optical systems is too sensitive to be placed in a container. Those systems are sensitive to dust and humidity, not ours. And because the powder is only heated to 300 degrees C, no shielding gas is needed.”

In his presentation at the Virtual AM for Defense Conference, Stefan Ritt discusses the initial results of the Australian Army and SPEE3D tests. He will also show how the Navy is using the technology to optimize the maintenance of the Australian naval fleet. He will show why there will be a shift in the maintenance services of the armies towards additive manufacturing in the coming years. “First of all because of the obsolete parts, spare parts that are no longer there. The second reason is that it will be easier to adapt parts to local conditions. And the third reason is the digital twin.”

Why AM is the game changer for defense

This digital twin makes it easy to send data to mobile 3D printers in the field or to nearby 3D printing companies for manufacturing on demand. This will fundamentally change the logistics within defense. In the past, armies have lost major wars because they didn’t have their logistics supply chain optimized. “If the logistics chain shifts to electronic data transfer, that’s a real game changer,” says Stefan Ritt.

Does this mean the end of the current business model of defense suppliers? That is not necessary, thinks Stefan Ritt. Logistics is going to change although. “The model shifts from stockpiling and holding, which costs money, to production on demand. This saves suppliers working capital. They can produce with additive manufacturing on demand, which means that the defense units always have the latest products at their disposal. “And you have a sustainable production model, because you don’t consume unnecessary material anymore.”

One of the other speakers at the second part of the AM for Defense Conference is Onno Ponfoort, Strategy Consultant, Business Developer and Practice Leader 3D Printing at Berenschot. His topic will be certification and digital warehousing.

The challenge he sees for the short term lies in the field of certification and standardization. Specific additive manufacturing standards are lacking, especially for defense applications. Nevertheless, he does not consider this argument, which opponents often use to point out the unfeasibility of the concept, to be justified. “You need these standards, all defense companies must make agreements about them. And the printer manufacturers must develop their technologies in such a way that they meet the requirements”. An initial test of SPEE3D with the Royal Australian Navy has shown that this is possible. Tests by a NATA-certified laboratory have shown that a 3D printed hose coupler meets all the relevant standards, in this case Mil-C-27487/A-A-59326. The coupler was printed with the LightSPEE3D from aluminum in just 25 minutes. Compare that with ordering a casting part.

Stefan Ritt will speak at the second session of the Virtual AM for Defense Conference on November 3rd. More information can be found here. 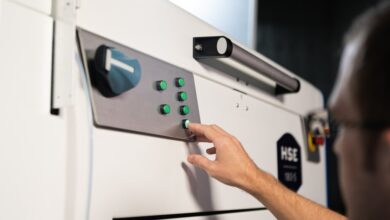